Karl Lagerfeld, the legendary German Chanel couturier and photographer died on Tuesday morning in Paris - after long battle with pancreatic cancer.  He was 85. His death was announced by house of Chanel.

Lagerfeld was an industry icon for more than 50 years - and was best known as the creative director for Chanel, Fendi, as well as his eponymous fashion house.

In 1983, Lagerfeld  started working with the once moribund house of Chanel - at the time when they were still known for their tweed suits.

Being the visionary and ambitious man that he was, Karl took it as an opportunity and challenge - as he said,  “to revive a dead woman.” Not only had he revived Chanel - he had also transformed and revolutionized the fortune of Chanel into a top leading high fashion global superbrand and celebrity favorites.

Karl was also among the first to bring luxury fashion to the mass market when he designed for mainstream. Lagerfeld's eye for fashion was not limited to clothing - he even collaborated and designed 3 limited edition bottles for Diet Coke (named after his infamous cat, Choupette)- after all, it was his favorite drink.

In 2004, Karl became the first designer to design for H&M - with a 30 piece clothing collection which sold out in hours (truly fast fashion). The world has lost an icon," Paolo Righi, the CEO of Karl Lagerfeld, said in a statement. "Karl Lagerfeld was a creative genius; he was influential, curious, powerful, and passionate. He leaves behind an extraordinary legacy as one of the greatest designers of our time."

"Chanel's chief executive, Alain Wertheimer, said in the release: "Today, not only have I lost a friend, but we have all lost an extraordinary creative mind to whom I gave carte blanche in the early 1980s to reinvent the brand."

As news of his death began to circulate through the haute couture and fashion world, saddened admirers took to social media to pay tribute to the fashion icon. "Rest in peace, Karl. I remember being so scared to interview you and yet you were in fact incredibly witty and generous. Thank you for inviting me to some of the most glamorous experiences of my life, it was an honour to know you. Oh yeah and thanks for the dry shampoo tip, will always think of you as I powder my wig. ❤️" - Alexa Chung | Instagram "🕯Today, at the age of 85, Karl Lagerfeld, one of the most legendary designers of the 20th and 21st centuries, has died. Below, Condé Nast Artistic Director and Vogue Editor in Chief Anna Wintour remembers Chanel’s creative director and her longtime friend. .
🕯“Today the world lost a giant among men. Karl was so much more than our greatest and most prolific designer—his creative genius was breathtaking and to be his friend was an exceptional gift. Karl was brilliant, he was wicked, he was funny, he was generous beyond measure, and he was deeply kind. I will miss him so very much.”
- Anna Wintour | Instagram 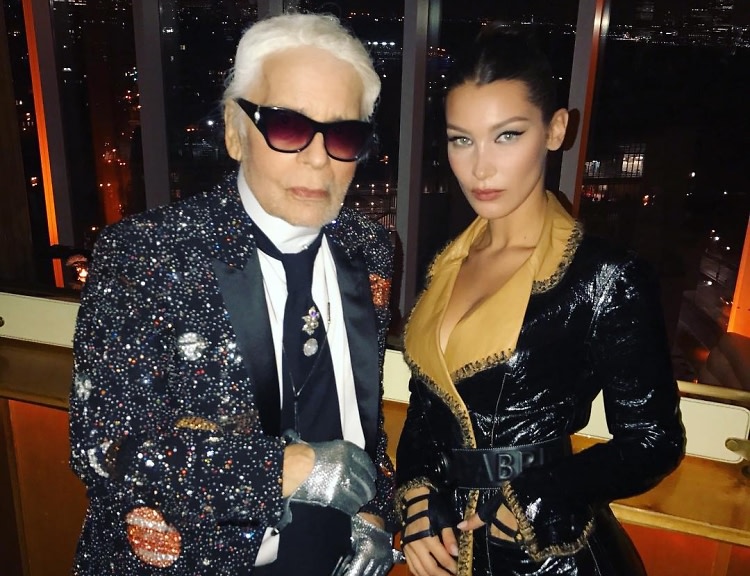 "Nothing feels right today..at a loss for words and so heartbroken by the loss of Karl. His humor, wit , love and passion for fashion will live on forever. Thank you for the inspiration that you gave to this world and for all of the hearts that you touched in the process. Every time I saw you it felt like the first time & I will miss your hugs so much. I feel so lucky to have been in your presence. Sending my love to the Lagerfeld family and to all closest to him. I am so sorry. We all love you so much .💔 there are so many things I wish I could say to you but for now I will say goodbye... Rest In Peace KL❤️" - Bella Hadid | Instagram

“With the passing of Karl Lagerfeld we have lost a creative genius who helped to make Paris the fashion capital of the world and Fendi one of the most innovative Italian houses." - Bernard Arnault, chairman / CEO of LVMH, which owns Fendi. "I’m sad to hear that the one and only @KarlLagerfeld has passed. He was a giant in my industry and a man who gave me and so many others an abundance of wonderful opportunities and experiences in fashion, art and life. Truly, this is the end to an era." - Coco Rocha | Instagram

"Karl.....I cannot tell you how much you meant to me and how much I will miss you ♥️ I will never forget your kindness towards me, your laughs, your imagination ♥️ I came to France to see you this week and introduce you to my daughter...I’m heartbroken I was too late ♥️ Rest In Peace, I adore you ♥️" - Diane Kruger | Instagram "Karl your genius touched the lives of so many, especially Gianni and I. We will never forget your incredible talent and endless inspiration. We were always learning from you." - Donatella Versace | Instagram “Karl, I will miss your indescribable presence, watching your calm, quiet, genius mind working, your little jokes, amazing stories, and experiencing the clothes, sets, and productions only you could dream up. Thank you for believing in me and for the beautiful, incredible opportunities you brought to my career, but mostly, thank you for giving me the honor of knowing the magic behind the myth. There will never be another Karl Lagerfeld. I am overwhelmed with sadness today, but also with so much love, admiration, and gratitude for you. To all his beloved friends and colleagues, and his favorite girl Choupette🐾, my heart is with you. ❤️ Rest In Peace King Karl. I didn’t want this day to come. 💔.” - Gigi Hadid | Instagram

"I don’t even recall him knowing my name, but man did I know his. We have lost a true genius in the fashion world. His designs remain with us forever. RIP #KarlLagerfeld (PS. After baby diet goals 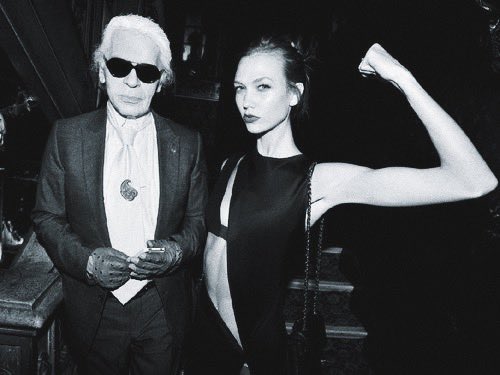 "The only thing more inspiring than Karl Lagerfeld's prolific creative genius was his kind heart, generosity and irreverent spirit! His mark on the fashion industry will live on forever, his loss resonates deeply with all who had the privilege to work with him ❤️" - Karlie Kloss | Instagram

"We lost a true legend! You were such an inspiration to the world! You shot my first fashion shoot & I was so nervous to work w such an icon! The world is so much chicer because u existed! I’m beyond honored to have had the opportunity to work w u. U are so loved & will be missed" - Kim Kardashian | Twitter 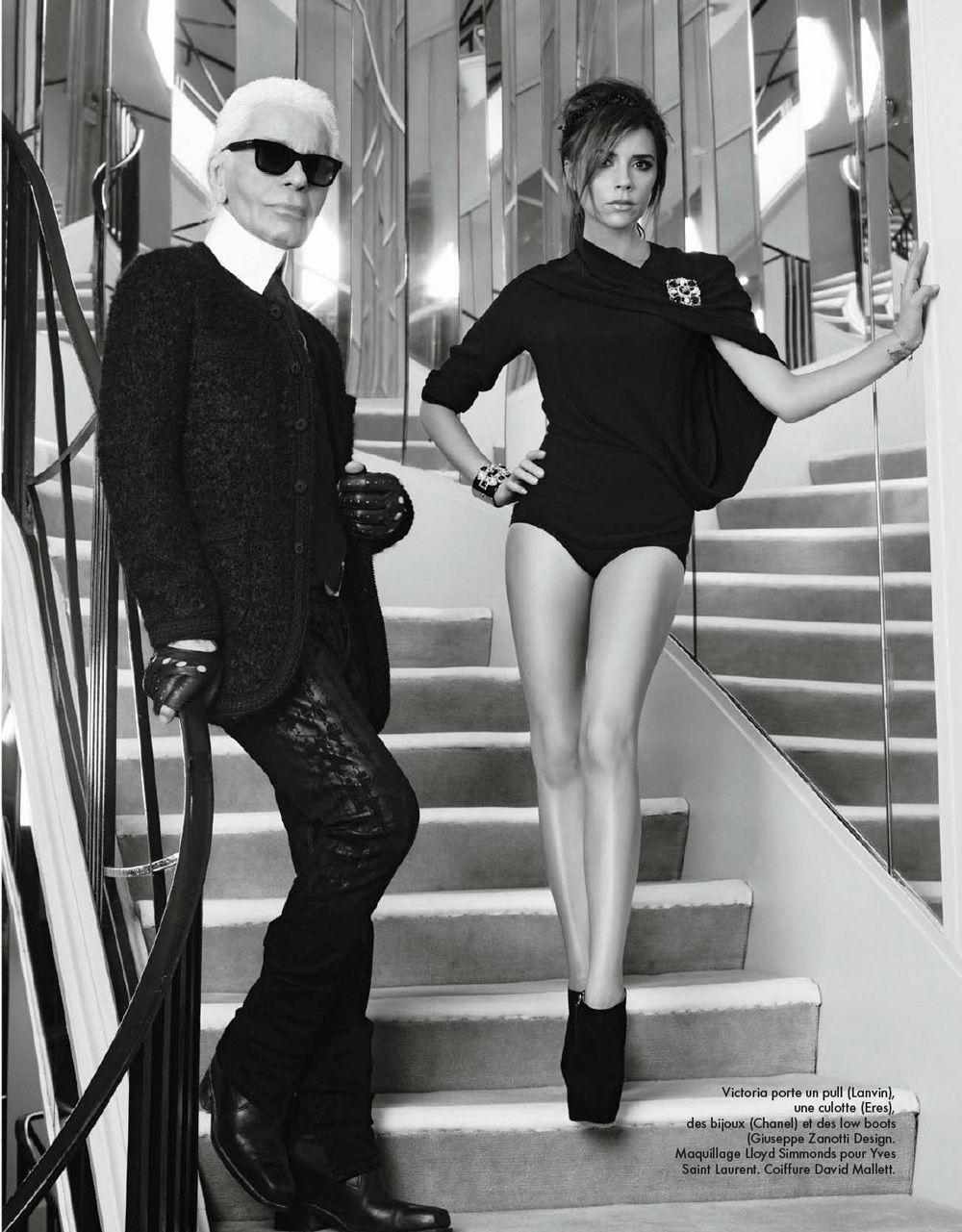 “So incredibly sad to hear this. Karl was a genius and always so kind and generous to me both personally and professionally. RIP.” - Victoria Beckham | Instagram

May Lagerfeld's legacy forever live on through his unforgettable moments, quick witted quotes / humor and accomplishments in the fashion industry.